So said Mark Twain , who’ famous phrase has been echoing in my head since quite some time. At long last I have taken the step to begin a new journey into the un-chartered territory of my dreams. My initial nervousness has been quelled by my every increasing excitement and now look forward to a new beginning.

After two and a half days of travel have finally reached Gantok to begin my volunteering stint with TMI. Both the train journeys were pretty good but my head is still spinning a bit from the five hour winding ride from NJP to Gantok. The air has a mild chill since it rained this afternoon and the skies have cleared out to portray beautiful dusk colors. Maybe that has helped clear my head from the doubts.

Will end with this beautiful Buddhist saying I had photographed on the Sandakphu trek.

It is amazing how dramatically the scenery can change in Arunachal,
barely within a span of a kilometer. After driving for seven hours through densely forested Jurassic valleys,
the landscape opens into a bowl of nature, with low undulating hillocks threaded by a tranquil meandering river Siyom. It’s like being in the English countryside. This is how beautiful Mechuka is, a surreal vista of rolling hills with grazing cows and horses, dotted with small villages. 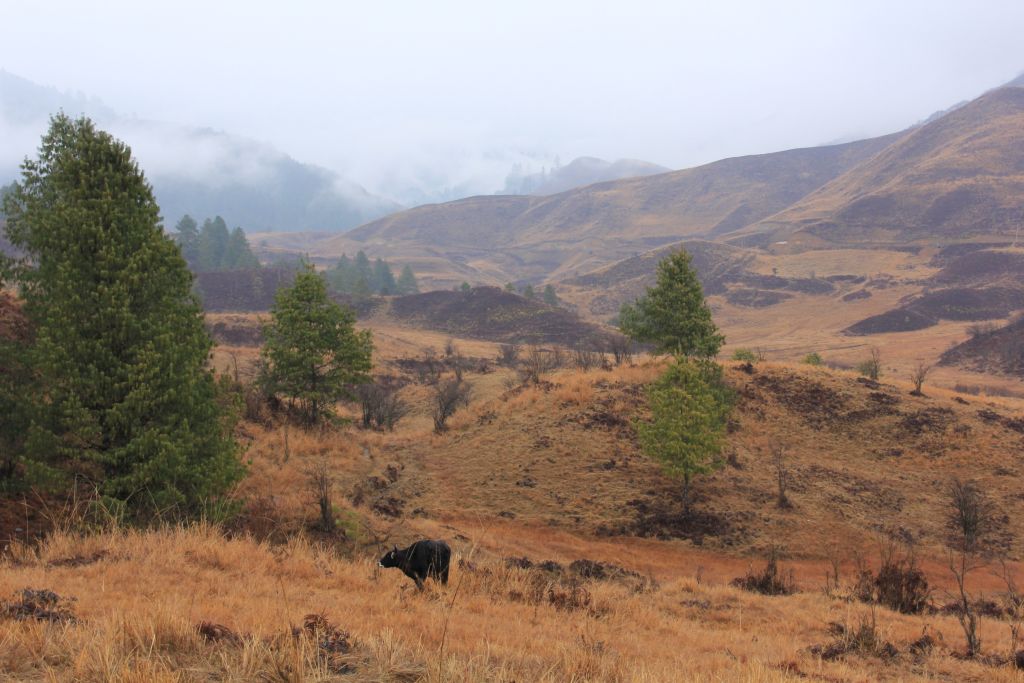 As a tourist destination Mechuka (or Menchuka)in Arunachal Pradesh is still unknown to the outside world. It was opened to visitors only in 2007, with a tarred road reaching the remote valley as late as 2003.This remote valley 29 kilometers from the Indo-Tibet border is one of the most beautiful and unspoilt areas in India. Its beauty is accentuated by the local Memba tribe who reside in quaint wooden houses besides their millet and buckwheat fields.

We drive into the main market, and ask a shopkeeper for directions to our host Gebu’s house; the first left followed by the second right gets us to his warm wooden cottage.After settling in, we sit down and chat with Gebu and his family around the kitchen fire over a hot cup of tea, the perfect way to spend a cold February evening. A little later, an Australian couple joins us at his homestay, adding to the interesting conversation.Gebu talks about the history of his tribe – Memba, a primarily Buddhists community, and how they came to Mechuka. 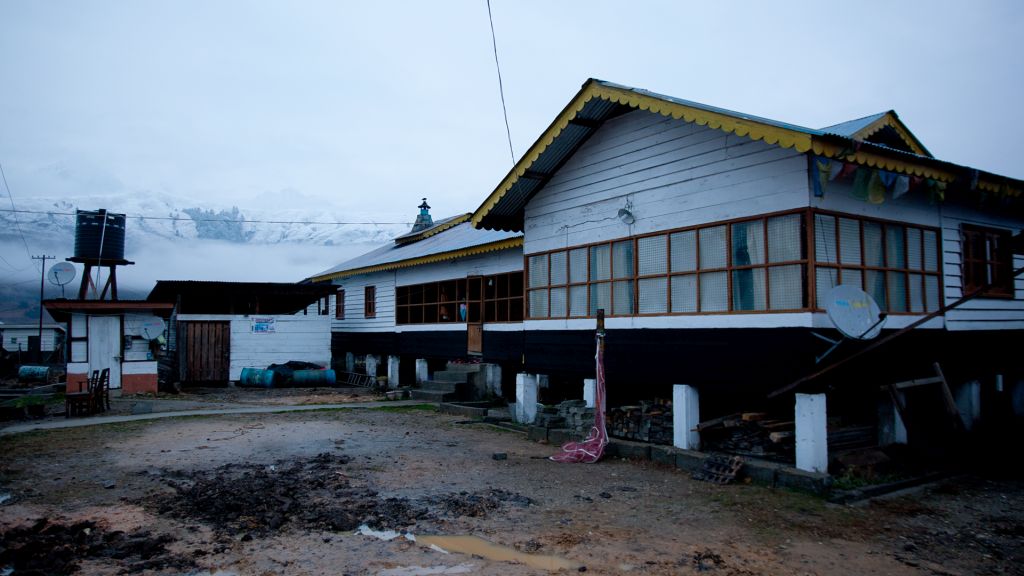 Next morning the weather isn’t too appealing with clouds hanging low and a continuous drizzle. Our host is still upbeat. After breakfast he decides to take us to the source of the Yargyap Chu, the main river which cuts through the Mechuka forest. We follow a trail through the most amazing temperate forests we have ever walked, to reach a holy cave where locals come to pray very often. From here a narrow path leads down to the river, which flows through the dense forest. The place has an immediate meditative effect on all of us, absorbing us in its tranquility. Gebu breaks the silence, explaining the origin of the name “Men-Chu-Kha” which loosely translates to “The land of medicinal water” (Men – medicinal, chu – stream, kha – treasure). 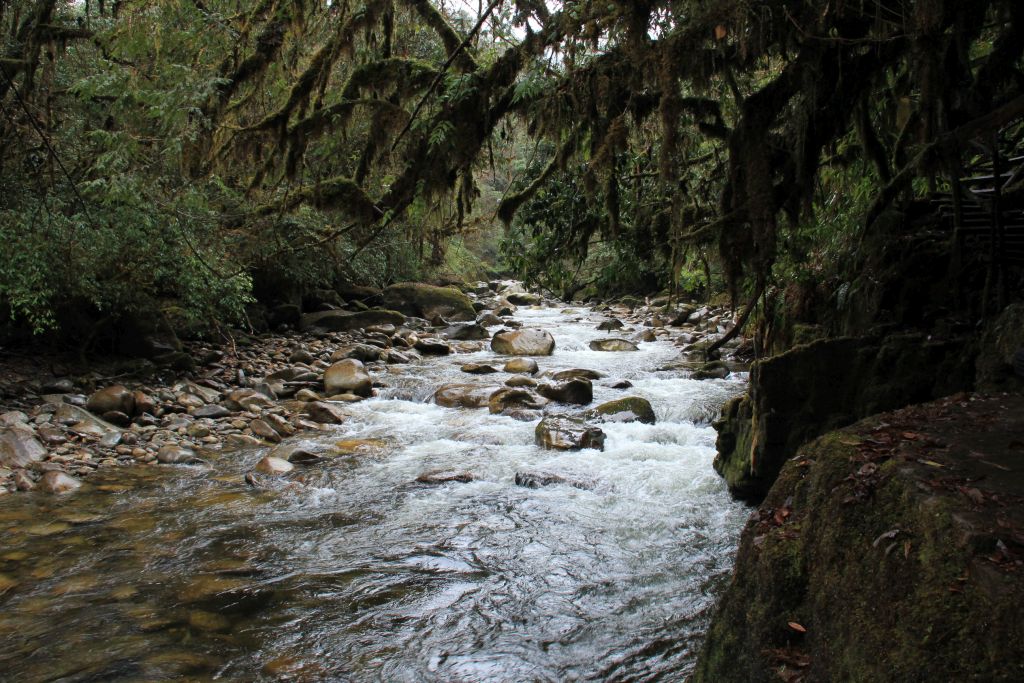 We walk back and get into our car to continue further on the road. It leads to China, which is just 27 kms from here. The drive is breathtaking as the narrow road zigzags through pine forests enveloped in the clouds. We stop at an army check post where we have piping hot tea, take some pictures and head back for the homestay. 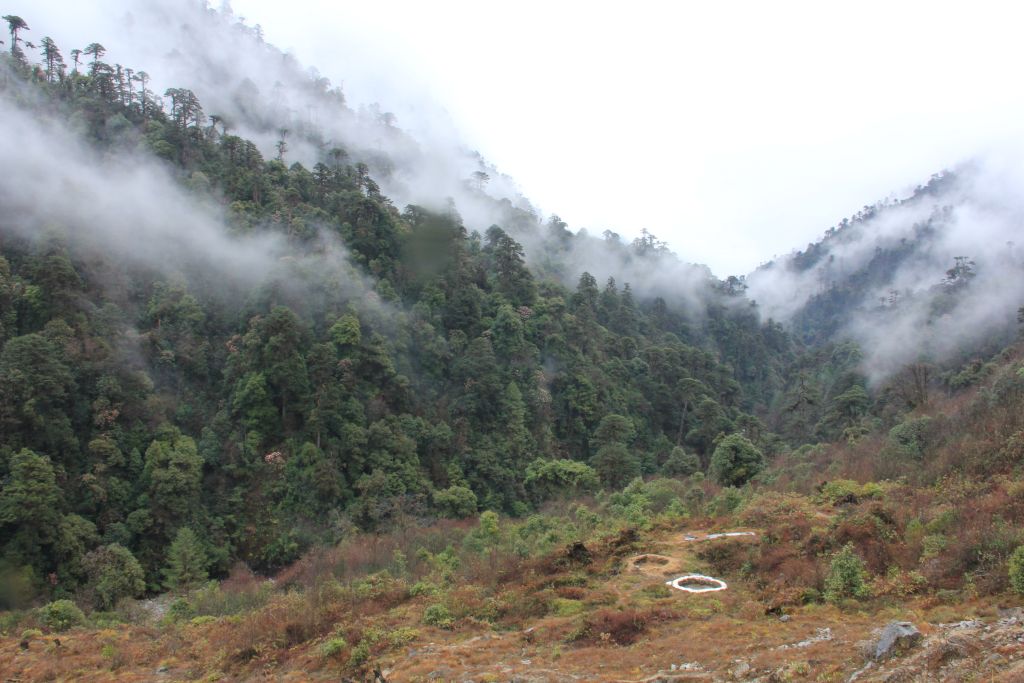 The weather takes a turn for the worse in the second half forcing us to stay indoors. But we are more than happy to sit next to the wood stove and continue our chat over cups of tea.

The second morning isn’t any better as our ill luck with the fickle weather continues. Our initial plan is to walk to the village of Dorjeling, which we reluctantly drop. Instead we choose to go to the nearby village of Lhallumg loosely translated as ‘The Place of God’. Gebu narrates us the tale of Guru Rinpoche coming to the place first, where he defeated a local demon to finally make it habitable for the common people, thus giving the village its name. He verifies the story by showing us the foot print and seat marks of the Guru which had been embossed in a rock.

On our way back all of us once again decide to stop at the source of Yargyap Chu since we were in love with the place. In the afternoon Gebu’s father, a learned monk, comes to meet us. Even though we don’t understand each other’s’ language, we spend some time together. Towards the end, he recites a special prayer to bless us all. 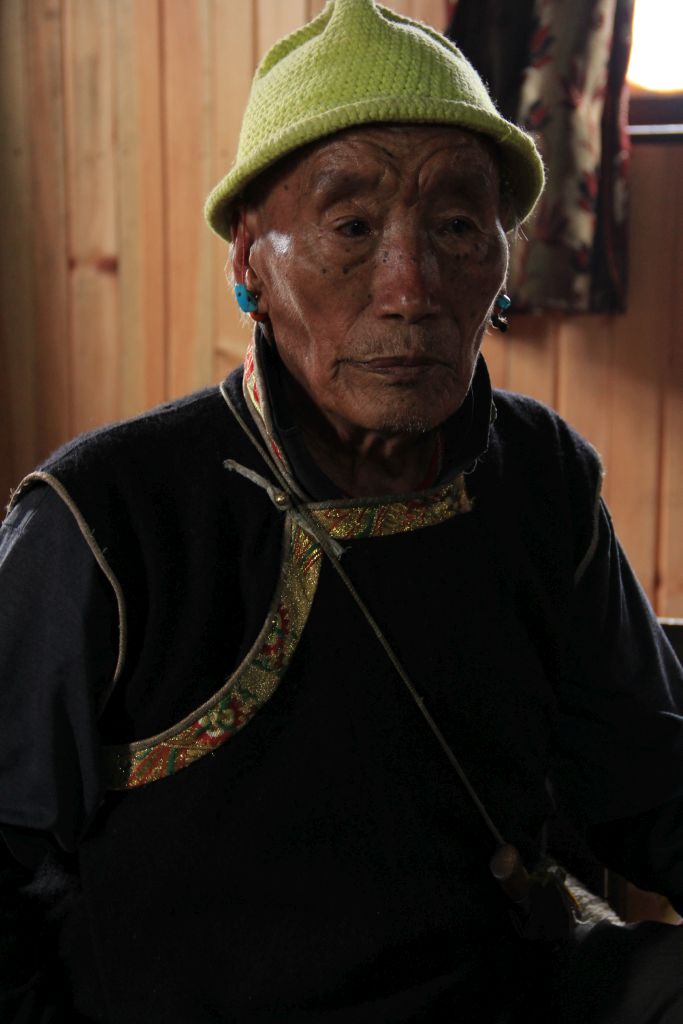 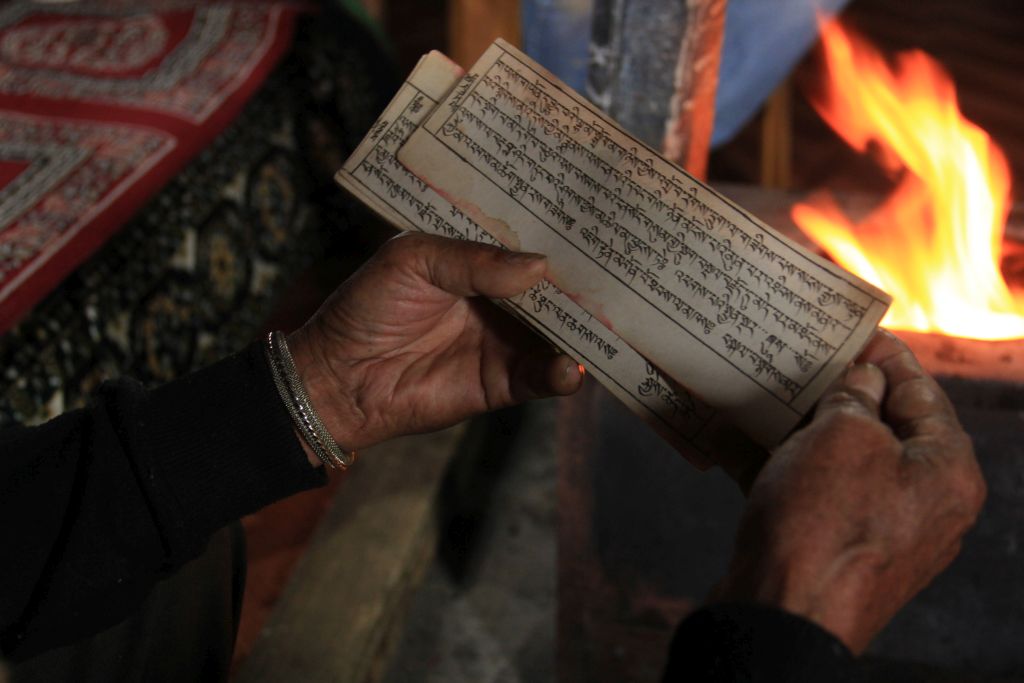 Next day, despite the light drizzle, we head out for the trek to the SamtenYongcha monastery. This 400-year old monastery of Mahayana Buddhist sect is older than the revered Tawang Monastery. We drive to a certain point on the road from where we begin our trek to the monastery. The trek starts with a good deal of excitement as we have to cross a long wooden suspension bridge over the Yargyap Chu. On crossing over we bumpinto a bunch of kids who decide to accompany us to the top. As we climb up the hill, we can see more of the mesmerizing Mechuka valley. On a clear day snow-capped mountains adorn the green vale enhancing its beauty. Alas, luck is not on our side! 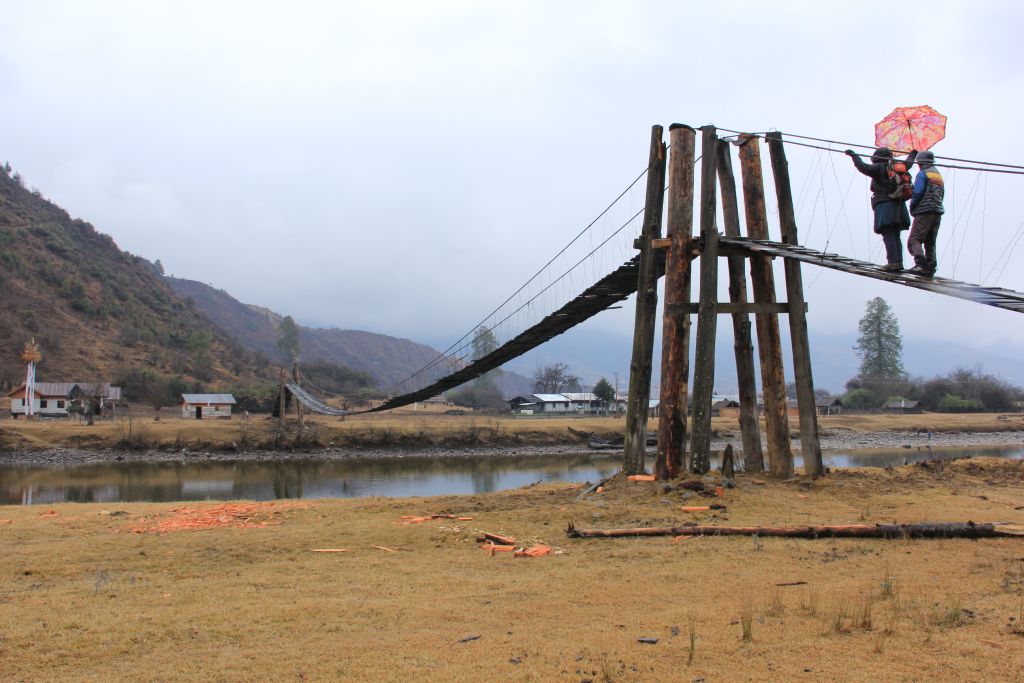 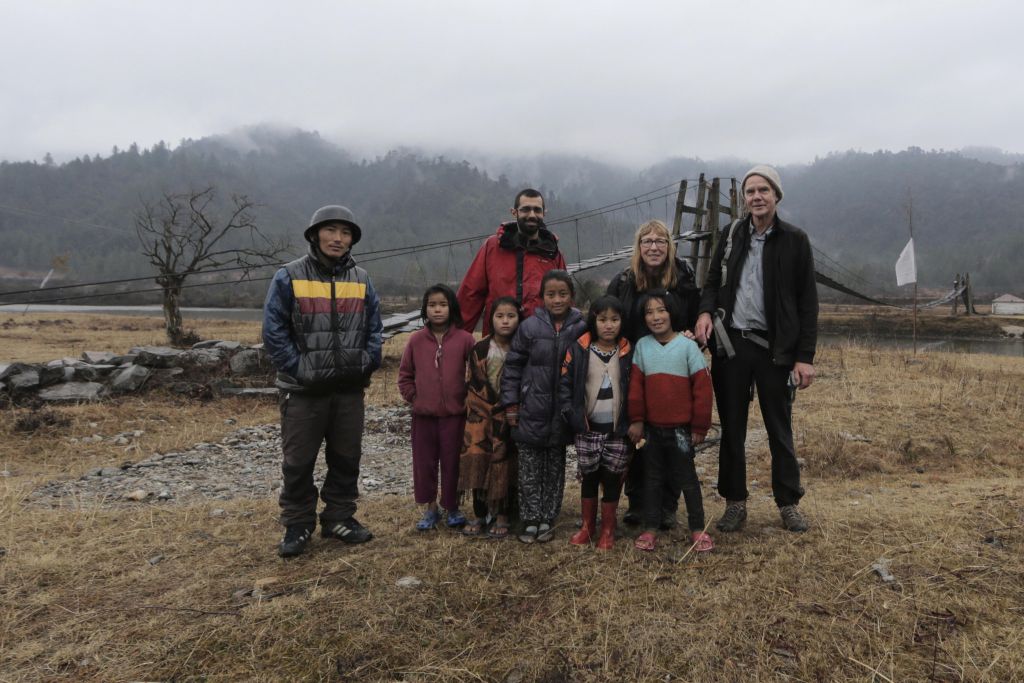 The monastery is majestic. The outside is austere, but the interior is one of the best we have ever seen. Built in the 14th century it is much older than the Tawang monastery. It has beautiful statues of Guru Padmasambhava and his incarnations. The side walls are covered with masks of mythological figures used during the Chaam dances. We spend some time outside, taking in the grand vistas of Mechuka from this strategic hillock. 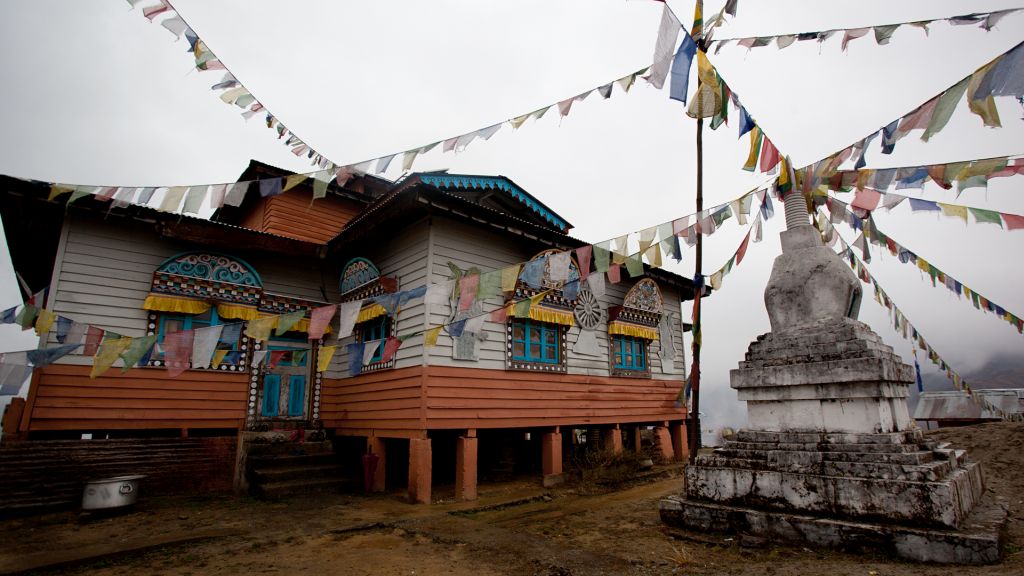 In the evening Gebu’s wife decides to cook us momos for dinner which ends up being a masterclass. We sit around the kitchen as she shows us the art of making them. We polish off almost a 100 momos among the 12 of us. The local rice wine offered by our host makes it a perfect meal for our last night. 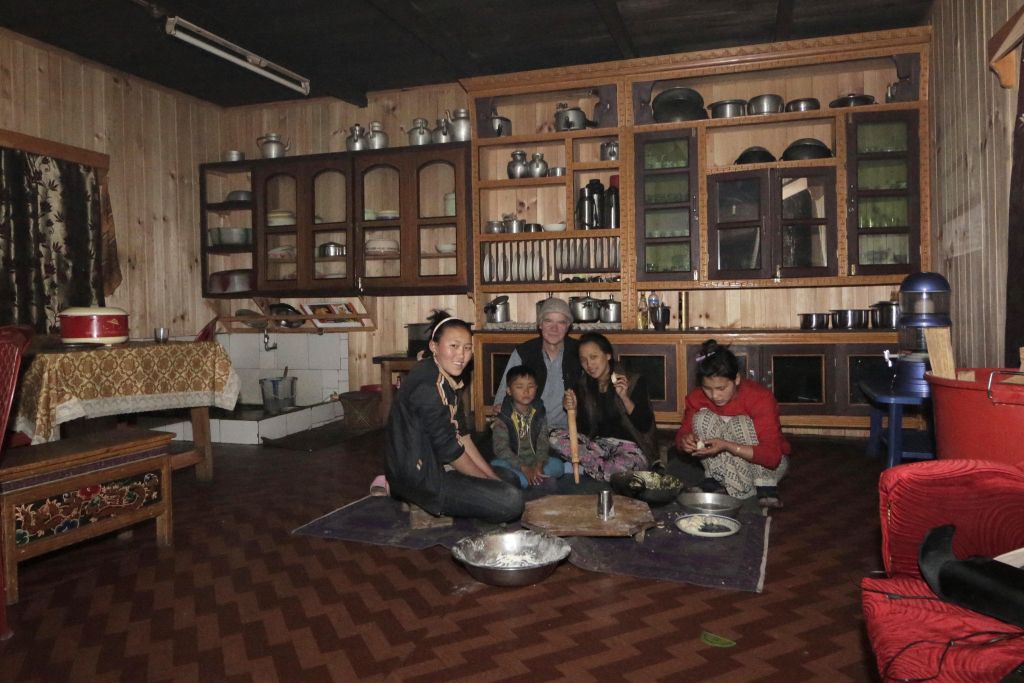 The following morning, it is time to bid farewell to Gebu and his family.Mechuka has captured our imagination and we have left a part of us in the vale. We promise to head back there soon!