Kitchens are a great place for conversations, stories and to learn about the local culture. As we sit in the smoky kitchen, sipping on our second cup of butter tea, Dorjee our host gives us an overview of the Monpa people.

The term Monpa was a word coined by the Tibetans, referring to the people of Tawang who lived in the lowlands bordering the southern part of Tibet. They had a long standing relationship with the Tibetans, in terms of trade, culture and religion. Indeed the 6th Dalai Lama was born in Urgelling, a village three kilometres from Tawang. Also during the 18th and 19th century Tawang was completely administered by the Tibetans, under whom they had to pay taxes to the Tibetan government in Tsona. With this brief lesson in history we set out to explore Tawang.

It was difficult not to be impressed with the sight of the imposing Tawang monastery, its massive white walls capped with yellow roofs dominating the entire landscape. Playful monks greeted us with a radiant smile as we walked into the main compound. Their rosy cheeked laughter were a great ice breaker for starting a conversation. On inquiry, one of them informed us that currently there were 510 monks currently residing in the monastery. He went on to elaborate their schedule, with their day starting by 3.30 am and finishing off at 6.30. After a friendly banter we bid them farewell to explore the main assembly hall. The sight of the 18 foot gilded Buddha completely stunned us with its grandeur while simultaneously submerging us in its spiritual aura. The walls were painted with life stories and teachings of the Buddha , with Thankas hanging all around. After being blessed with holy water by a senior monk, we slowly tread on with an aura of spirituality. 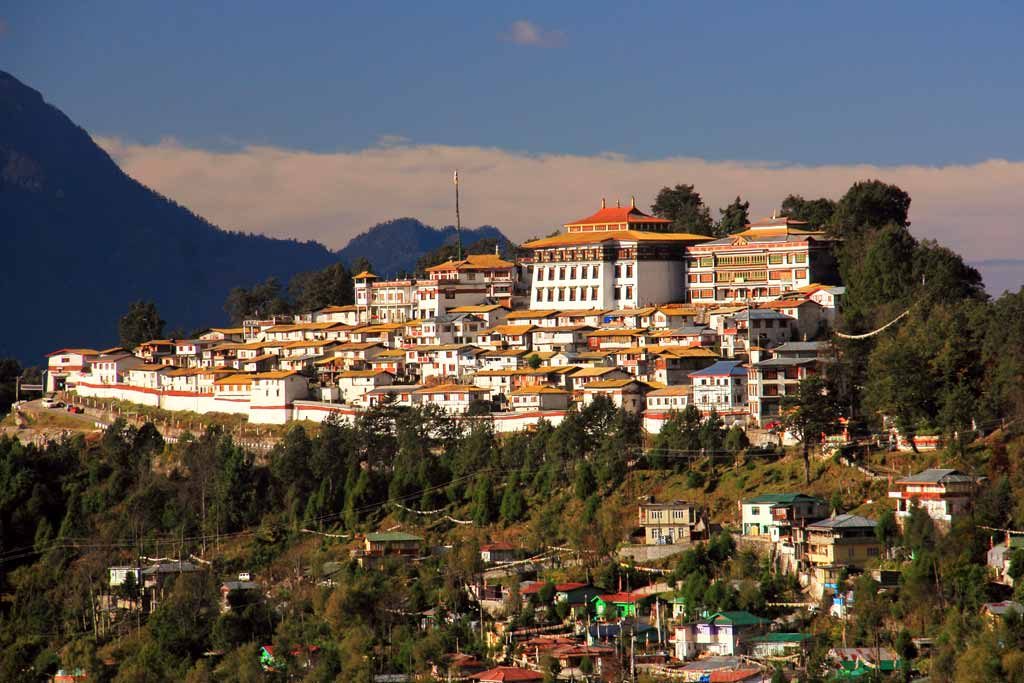 The following morning we drove to Kitpi , a small cluster of villages 25 kilometres from Tawang. Visiting small villages to interact with the people, is at the core of our travel philosophy. Most people come to Tawang to see the monastery and the glacial lakes, missing out on the culture of the place. But to feel the real vibe of a place it is imperative to visit villages and mix with the locals. The sight of golden paddy fields dotted on green slopes greeted us , as we drove on the bumby road to Kitpi. Wild pink flowers punctuated the landscape with their contrast, making for good landscape pictures. The sweet scent of ripening paddy tingled our nose as we started walking around the village. There were barely 18 houses in the village, blending well in the surrounding environment , with their mud and stone traditional architecture. Only the kids and elders were there in the village, as all able bodied people were out in the fields harvesting paddy. We stopped by to chat with a group of elderly ladies who were threshing millet, the staple grain of the Monpa. 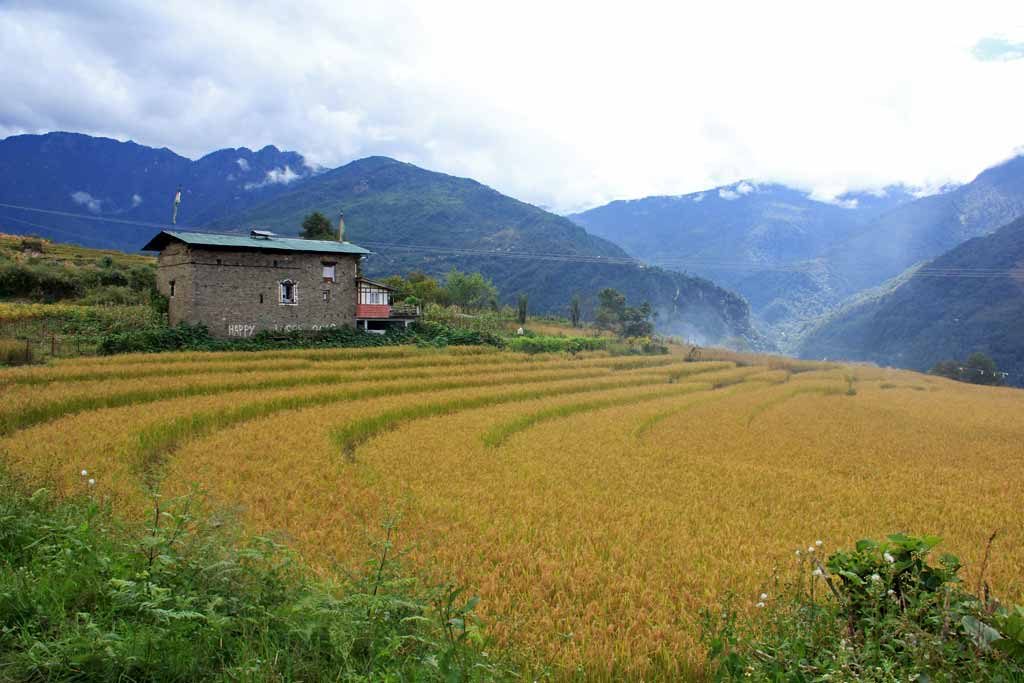 One of the ladies was amused at her being photographed from all angles, and so engrossed we were that we didn’t realise when one of her companions slipped out to get a jug and some glasses. Initially we though that they were offering us some water, but when she poured the light brown liquid we realised exactly what it was . The creamy texture and sweet taste of the millet beer was refreshing , to say the least. Half a glass was enough to give us a good buzz and generate a lot of laughter within the group. How fortunate we were to feel the genuine hospitality of the local villagers, despite leading a hard life they were always so welcoming to visitors. Luckily we had a hand woven Naga shawl in our bag which we gifted to the lady as an appreciation. With profuse thanks from both parties we all set out on our own paths. 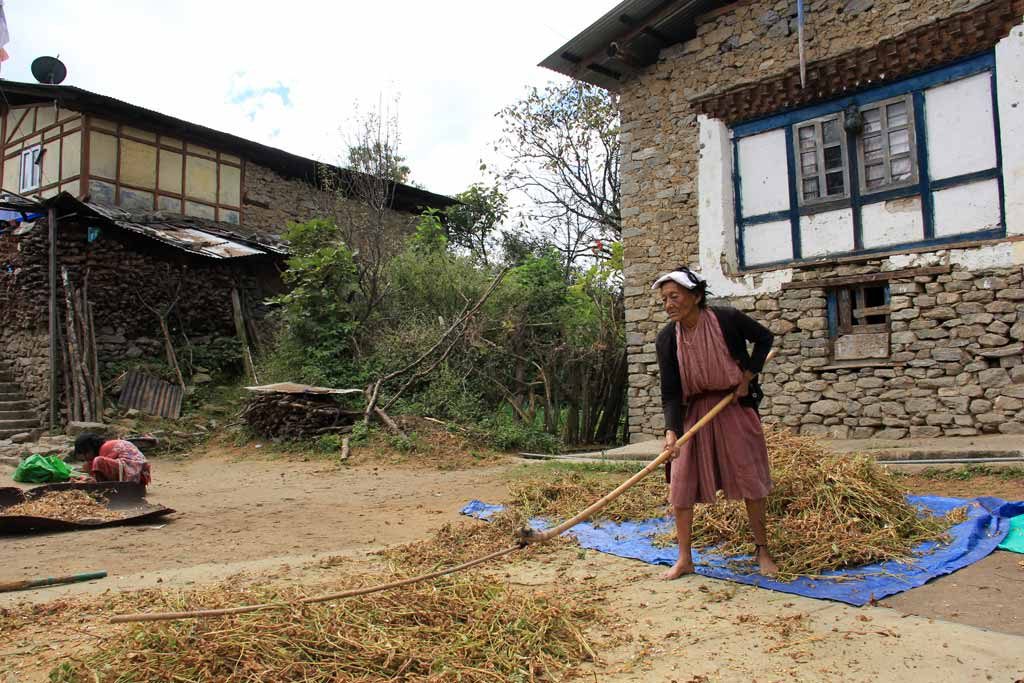 We continued driving further down, till the road literally reached the end. A fifteen minute walk through the picturesque landscape , got us down to the Tawang Chu. The reason for coming down all this way was to see a bridge, but it was no ordinary one. This bridge was built in the 14th century by Lama Thangtong Gyalpo, a great architect who constructed many iron chain bridges all over the Himalayas. This bridge is referred to as Chaksam bridge, from the Tibetan translation of chak meaning iron and sam meaning bridge. Only few of these bridges now remain in the Himalayas, transporting us back into time. 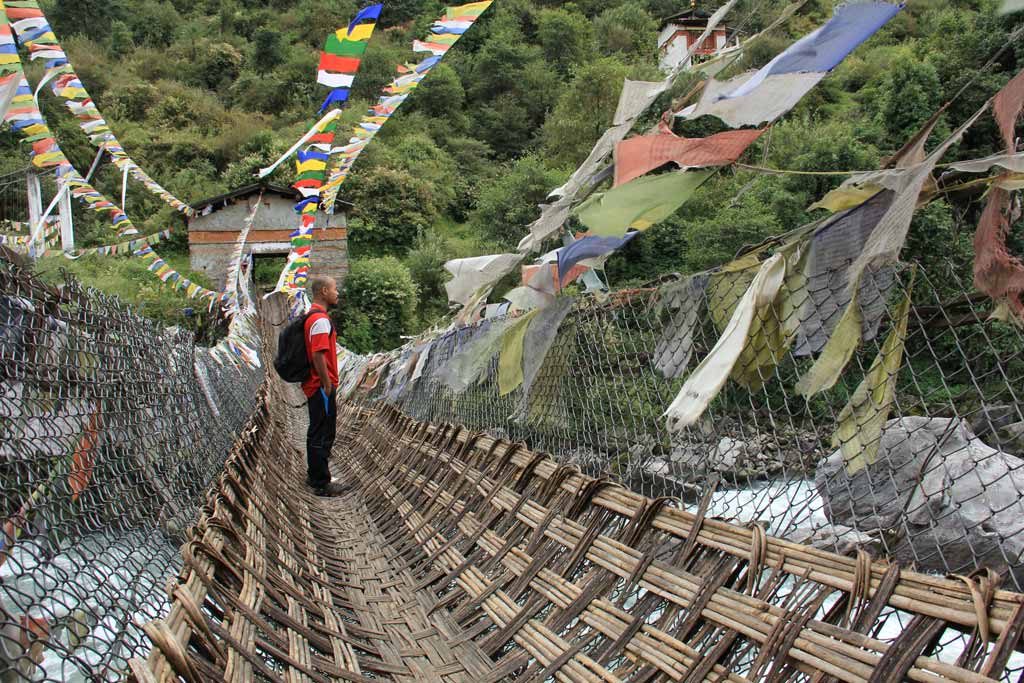 On the way back our conversation inevitably led us to discussing about all the varied things we had seen and done during the trip, and everyone unanimously thought the walk in Kitpi was by far the highlight of their trip. So the next time you decide to go on a tour to Tawang, do make it a point to venture into nearby villages. The heart to heart experiences with the local people is what will stay longer in your memory , rather than the scenic landscapes.