A land of incessant rainfall and thunderous waterfalls, giving the entire landscape a very surreal effect.

Geologically the state is a part of the Meghalay plateau with altitudes ranging from 150m to 2000m. The central part of the plateau comprises the Khasi hills which has the highest elevations followed by the Jaintia Hills in the Eastern section. The Garo Hills, which fall in the Western part of the plateau are relatively flat, thus having a more tropical climate. The capital Shillong which is also a hill station is often referred to as the Scotland of the Eastand has been a tourist destination since the British ruled the North East province.

Meghalaya is credited with being the wettest state in India with some areas receiving rainfall as high as 1200 cm annually. The little town of Cherapunjee is very famous for it’s world record status of receiving the most rainfall in a calendar month. But it is the little village of Mawsynram which holds the distinction of seeing the heaviest rains.

The Meghalayan subtropical forests have been considered among the richest botanical habitats of Asia. These forests receive abundant rainfall and support a vast variety of floral and faunal biodiversity. A small portion of the forest area in Meghalaya is under what is known as “sacred groves”. These are small pockets of ancient forest that have been preserved by the communities for hundreds of years due to religious and cultural beliefs. These forests are reserved for religious rituals and generally remain protected from any exploitation. These sacred groves harbour many rare plant and animal species. The Nokrek biosphere reserve and the Balaphakram National Park, both in the West Garo Hills are considered to be the richest biodiversity sites in Meghalaya. 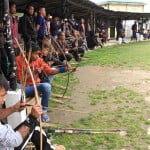 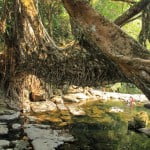 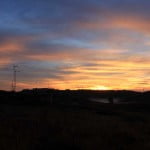 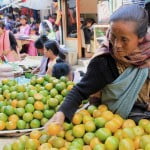 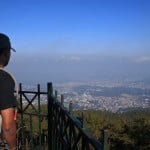 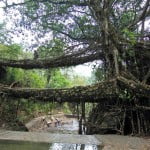 Before the state of Meghalaya came into existence, the area was ruled by the independent kingdoms of Jaintias, Khasis and Garos. Not much is know about the origins of any of the kingdoms since none of these tribes had a written script. In the 19th century all the three kingdoms succumbed to British rule and became part of the North East province.

At the time of Indian independence in 1947, present day Meghalaya constituted two districts of Assam enjoying limited autonomy within the state of Assam. The Assam Reorganisation Act which came into effect on 2nd April 1970, gave birth to an Autonomous State of Meghalaya within the State of Assam. In 1971, the Indian Parliament passed the North-Eastern Areas (Reorganization) Act, which conferred full statehood to the Autonomous State of Meghalaya. Meghalaya finally attained statehood on 21st January 1972, having its own assembly.

Khasi:
The Khasis are the predominant tribe inhabiting Eastern Meghalaya. They are a sub tribe of a group called Hynniew trep meaning ‘The seven Huts’ in Khasi. The other sub tribes in this group include Pnar, Bhoi , War and Lyngngnam. They are known to be one of the earliest settlers in the Indian sub-continent. But with the approach of the missionaries most of the people have converted to Christianity with very few people following their tribal religion, called variously, Ka Niam Khasi, Ka Niam Tre, or Chnong.

The Khasi men traditionally wore a jymphong or a longish sleeveless coat without collar, fastened by thongs in front, while the women wore what is called the jainsem or dhara. On ceremonial occasions, the men folk appear in jymphong and dhoti with an ornamental waist-band occasionally donning a turban.

Music and dance are an integral part of the Khasi culture , playing a central role in all their ceremonies and festivals. One of the basic forms of Khasi music is the ‘phawar’, which is more of a “chant” than a song, and are often composed on the spot, impromptu, to suit the occasion. Their most important festival is Ka Pom-Blang Nongkrem which goes on for five days . This festival gives thanks to the Lord Almighty for a good harvest along with which the participants pray for peace and prosperity of the community. The festival is celebrated in the month of October or November in the village of Smit.

Jaintia:
The Jaintias who reside in the Jaintia hills draw the same lineage as those from the Khasi. The central region of Jaintia Hills are inhabited by a tribe called “Pnars” while the southern and northern regions and inhabited by “Wars” and “Bhois” respectively. Over a period of time all three tribes have been collectively labelled by the generic name Jaintias. Despite some similarities with the Khasi they have their own unique customs and traditions. Even today many people still maintain their unique religion called Niamtre.

The dress of the various Jaintia tribes is very similar to that worn by the Khasi people. The Jaintias being close to nature emphasis the link between man, his culture and the natural environment in their various festivals. Behdienkhlam is the most important festival of the Jaintias focusing on praying for the property and good health of the people as also invoking divine blessings for a bountiful harvest.

Garo:
The Garos are the indigenous tribe residing in the Garo hills region of Meghalaya. They originally migrated from Tibet thus belonging to the Tibeto-Burman race. They call themselves Achik Mande, literally meaning the hill people. They were an animist tribe believing in their traditionl religion of Songsarek. But with the advent of the American Baptist and Christian missionaries in the later part of the 19th century most of them converted to Christianity. Like the Khasis they too are a matrilineal tribe tracing their descent from the mother’s side.

The Garo dress used to be very simple with the men wearing a loin cloth and the women wearing a piece of cloth around their waist with a blouse or vest on the top. On all festive occasions, the Garos, irrespective of sex, wear head dresses with rows of beads stuck with feathers of hornbill. Rice forms the staple diet of the people but being a tribal community they eat everything from chicken and fish to pigs and wild animals. They are very fond of drinking and mainly consume liquor brewed from rice.

Since farming plays a very important role in the lives of the Garo tribe, most of their festivals are centred around agriculture. Their most important festival Wangala is a post harvest festival, in which Saljong, the god who provides mankind with Nature’s bounties and ensures their prosperity, is honoured.