The mountainous state of Sikkim is situated in the very heart of the Eastern Himalayas. Nestled between Bhutan, Nepal and Tibet, it is a picturesque land, rich in natural beauty, laden with snow capped mountains, spectacular glaciers, perennial rivers and dazzling lakes. The Teesta river, which originates from the Tibetan plateau, forms the life giving force of Sikkim. Along with its tributary Rangeet they carve out deep gorges as they roar through the verdant valleys. From the banks of the Rangeet to the snow clad mountains, the elevation ranges from 280m to above 7000m covering habitats from sub tropical to the alpine.

Mt. Kangchenjunga, the third highest mountain in the world plays a central role in the lives of the local people. Many customs of the populace and history of the area revolve around Kangchenjunga. The Kangchenjunga range running east west along with the Singalila ridge, is also responsible for providing the perfect climatic conditions for biodiversity.

With more than 5000 flowering plants, 500 orchids, 500 species of birds, 650 species of butterflies, Sikkim is truly a biodiversity hotspot. More than 36 varieties of rhododendrons bloom during spring time, transforming entire hill slopes in a riot of colour, aptly earning the status of the state flower. Sikkim is also home to some endangered mammals like the coy Red Panda which lives in the temperate forests while the elusive Snow Leopard is found in the alpine zone. 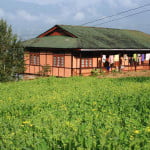 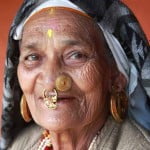 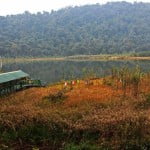 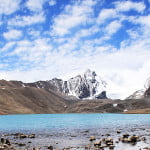 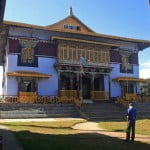 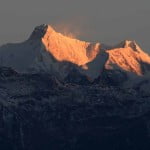 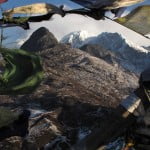 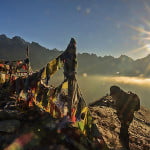 The history of Sikkim is as diverse as its communities. Lepchas are the oldest surviving tribe in Sikkim. Limboos are also autochthons of the region. The Bhutias migrated here from Tibet over centuries, and gradually acquired prominence, with lands and titles. They brought Buddhism along with them. Phuntsok Namgyal, a Bhutia, was the first consecrated king of Sikkim, given the title of Chogyal in Yuksom (meaning three wise men) by three lamas in 1642. Mahayana Buddhism was recognized as the state religion, and it continued so under all subsequent Namgyal rulers.

The rule of Namgyal dynasty continued for the next 300 years. For 200 years, they had fierce battles with invading armies from Tibet, Bhutan and Nepal. These skirmishes continued till the time the British subdued the warring Gorkhas of Nepal in 1817, and signed treaties with both Nepal and Sikkim.

In 1889 the British appointed Claude White as the first political officer in Sikkim, bringing the Chogyal completely under the British rule. In 1947 when India became independent, Tashi Namgyal successfully negotiated Sikkim’s status as a protectorate with Chogyal as the Monarch. However, by 1970 a political turmoil was beginning, demanding the removal of Monarchy in favour of a democracy. The confrontation between Chogyal and the elected government and the events that ensued, led to annexation of Sikkim, which became the 22nd state of India on 16th May 1975.

The peaceful coexistence of the Lepchas, Bhutias, Limboos and Nepali community characterises the cultural diversity of Sikkim.

Lepcha are believed to be the original inhabitants of Sikkim. They are an animist tribe who worship nature or the spirits of nature. Mount Kangchenjunga plays a very central role in their culture with most of their ceremonies and mythology being based around it.

Limboo is another indigenous community in Sikkim. The word Limboo, which means archer in Nepali, was given to them by the Gorkha community. But the people call themselves Yakthumba which is a combination of three Limboo words, Yak means Hill, thum means place or district, and ba means inhabitant, which together may be translated as “Hill people”.

Bhutias are Tibetans of Nyingma or Kagyu sect who migrated to Sikkim around 17th century. They are also refered to as Denzongpa or inhabitants of Denzong, the Tibetan name for Sikkim. They follow Mahayana Buddhism. Guru Padmasambhava or Guru Rinpoche as their supreme deity. Losar and Losoong are celebrated are their major festivals. Bhutias ruled Sikkim for 250 years as Chogyals.

Nepali, The people of Nepalese origin constitute 70 to 80 percent of the population of Sikkim. They consist of many ethnic groups like Rai, Gurung, Tamang, Chhetri and Sherpa. The Sikkimese Nepali community worship Hindu gods, following the tradition and culture as laid down by the Vedas. Dussehra, which falls in late September to mid October is their most important festival. They are excellent farmers, and introduced terrace farming in the state.