This trip is all about exploring the little know gems of Meghalaya, like the bamboo trek and Nongstoin island

Did you know that Meghalaya had one of the largest river island in Asia , or that there are many other root bridges than the double decker bridge in Cherrapunji or that in Mawlynnong. And that is exactly what our offbeat Meghalaya trip aims to do. To take you on an exploration of the little know gems  found in “The abode of Clouds”

Our offbeat Meghalaya tour takes you on a completely different path; starting with a thrilling bamboo trek, exploring little know root bridges and staying on a river island. If you like to tread off the beaten path, and don’t mind giving up luxury for adventure, then this trip is for you. 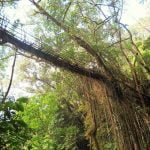 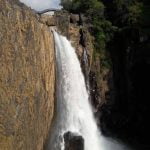 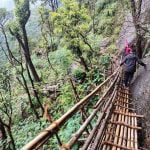 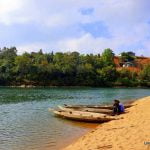 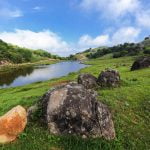 Meet and greet at Guwahati airport, from where we commence our offbeat Meghalaya tour. En route take a brief halt at the stunning Umiam lake, enjoying vistas of natural beauty. O/n at a guesthouse in Upper Shillong

Today you head out for a very unique and thrilling trek , most part of which is over a bamboo trail. Drive to the village of Wakhen from where you commence the exciting trek to Mawryngkhang; over bamboo trails. The route takes one down to Umrew river , from where a scary bamboo bridge leads further to a stony path . In many parts the route skirts the very edge of the mountain , with only bamboo bridges underneath your feet. The trek culminates on the 100 meter rock offering grand views of the George below , making your efforts worthwhile. The entire trek to and fro will take around 4 hours.

Continue riding to the tiny hamlet of Langkawet where we stay for the night. O/n at Langkawet Village Retreat

Images of the popular double decker root bridge in Cherrapunji come to mind when most people think of the unique root bridges of Meghalaya. But today you will set out to explore little know root bridges in the Pynursula region, an area having the highest density of root bridges.

Drive to the village of Rangthyllang , from where a rough overgrown ancient trail leads  to the village of Mawkyrnat. For most part you will walk through deep brush , negotiating steep slopes to see three different root bridges , one of which is the highest. By evening drive back to our village retreat in Langkawet.   O/n at Langkawet Village Retreat

The road less travelled now takes us to the Western part of Khasi hills, to the little know village of Mawphanlur. Set in the lap of nature, this village is spread over several hillocks with numerous small lakes.

On the way we make a small detour to walk through the sacred groves of Mawphlang. The Khasi tribe of Meghalaya were  once animists, who believed in the spirits of the forest. Hence every village maintained a tract of forest called Sacred Grove where they used to worship the elements of nature and perform sacrifices. The groves of Mawphlang are the largest one of their kind , with many trees which are 300 hundred years old. O/n at Travellers Nest

In the morning  set out for a half day hike to explore the scenic lakes around Mawphanlur. The landscape is akin to the English countryside with green rolling hills doting the landscape for miles.

By afternoon drive to Nongkhnum, the largest river island in Meghalaya . O/n at Nongkhnum River Island

Wear your explorers boots and get ready to explore Nongkhnum , the largest river island in Meghalaya. This  uninhabited island has many scenic trails, leading to gushing waterfalls. You will explore some of these picturesque trails.

By late afternoon  drive to Mawsynram, which has now replaced Cherrapunji as the wettest place on earth . You will stay at a camp set on the banks of a lake. O/n at Weiing Lakefront camp

In the morning head out for canyoning, a novelle adventure involving negotiation of the course of a river . It will be a fun adventure as you will have to slip, slide in the water and walk over boulders to get downstream. In the second half relax and unwind choosing to swim and kayak in the lake. We end our trip with a grand barbeque and bonfire, reliving the memories of our adventures in Meghalaya .  O/n at Weiing Lakefront camp

After breakfast drop to Guwahati airport

A surreal valley with undulating meadows where horses run wild, and inhabited by the warm Memba tribe, sums up the dreamscape of Mechuka valley

An ideal family trip to the picturesque hills of Nagaland with a mix of nature walks, cultural interactions , and a village stay

Dzongri is by far the most popular trek in Sikkim, affering close up views of Mt.Kangchenjunga, Mt. Pandim, Kabru and Simvo